Doug was saved at 20 years old and took his first mission trip to Romania with a team led by Alan Shelby just over a year later. It was on that trip that God called Doug to missions and where he met his wife Camelia.

In 1998 they were sent out to Transylvania, Romania with their one year old daughter Olivia. Two years later, their second daughter, Mira, was born in Romania. Doug and Camelia discipled young Christians and Doug worked as the Youth Pastor at a Baptist Church. In 2000 that opportunity closed and they returned to the U.S. for the next 10 years.

In 2010, while working as the Discipleship Pastor at Grace Church of Overland Park, Kansas, God opened the door for them to return to Romania and, after a year of raising financial support, they moved back. The day they moved to Romania they found out that Camelia was pregnant and seven months after arriving they had their third daughter named Attalia.

Doug and Camelia are excited to have this opportunity to share the gospel and to disciple through ministries and relationships in the city of Brasov, and dream of the day when they will be sending missionaries from Romania into all the world. Right now, they start with planting a church In a city of 21,000 where there Is no Bible believing church.

The Howey’s ministry is loving God and the people of Romania, sharing the Gospel of Jesus Christ while watching for the faithful people that God will draw to Himself, so that they may disciple them; always making themselves available to be used by Jesus as He establishes indigenously-led, reproducing churches, that send missionaries into all the world with the Gospel of Jesus Christ. 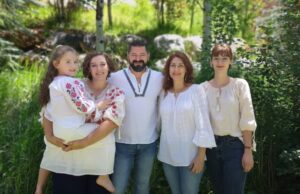